Truth to tell, most of us don’t spend a lot of time reading about various types of dental treatments. The fact is that unless it concerns us directly, the majority of people won’t take the time to investigate the different services offered by our dentists. For that reason, you may not know the difference between crowns and bridges. But if you have some dental issues that need to be resolved, it’s time to understand your options. In this article, we explain what crowns and bridges are, as well as the differences between the two. 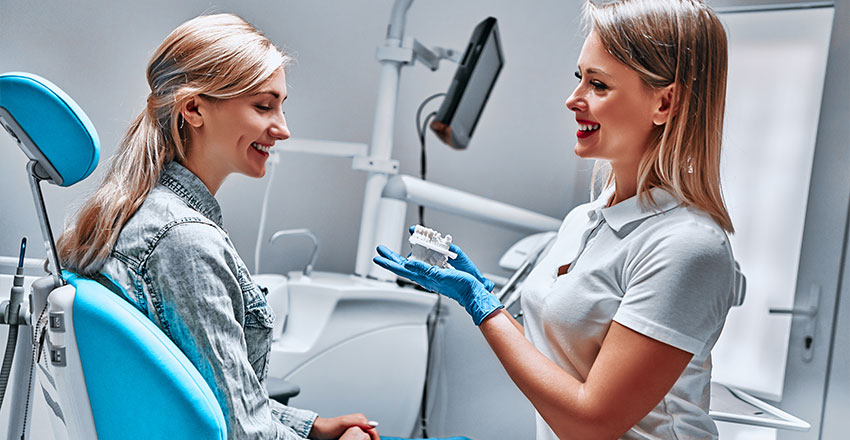 What is a Crown?

A crown, or a “cap” as it is sometimes called, is a dental restoration that is designed to entirely cover the surface of a tooth. Rather than removing a tooth that has been badly damaged by injury, extensive decay, or a cracked filling, your dentist may recommend a crown to save the tooth. Crowns are also used to provide additional protection for a tooth that has undergone a root canal. These remarkably strong and durable restorations come in a variety of materials, but they all have one thing in common: they are designed to either strengthen a weakened tooth or replace a missing one.

Conventional crowns come in a variety of different materials, including metal, porcelain, ceramic, zirconia, and metal fused to one of the other materials. Getting a new crown often requires at least two trips to the dentist’s office. During the first trip, the dentist prepares the affected tooth by removing decay or an old filling, for example. A physical impression will then be made of the damaged tooth using dental putty. That filling will be sent out to a lab, where the patient’s permanent crown will be created. In the meantime, the dentist will fit a temporary crown over the tooth to protect it until the permanent version is ready. During the second visit, typically about two weeks later, the dentist will cement the permanent crown to the tooth.

Although the conventional way of getting a new crown is still commonly offered by most dentists, there is an alternative method provided by some oral health providers: same-day crowns. This relatively new technology requires just a single trip to the dentist’s office. As the first step in this process, the dentist will prepare the tooth to receive a crown in much the same way as with a conventional crown. But here’s where the similarity ends. After the tooth is readied for a crown, the dentist will take 3D digital images of the affected tooth. Those images will then be transferred to a computer, which will create a model of the patient’s tooth. That model is then used by a milling machine located in the dentist’s office to manufacture the permanent crown. The patient is then fitted with the new crown, and the entire procedure is complete in a single visit. Although is method may be more convenient, same-day crowns are only available in a ceramic material that is not nearly as strong and durable as those made from other materials.

In addition being used as a protective cover over a damaged tooth, crowns are also used as replacement teeth in other dental restorations and appliances, such as dental implants and dental bridges.

What is a Bridge?

If you’re missing teeth – or even just a single tooth – it’s important to replace those teeth as soon as possible. If you don’t, you run the risk of a myriad of other more serious dental issues. Your other teeth can shift in an effort to fill in the gap left behind by the missing teeth. This can throw off your bite, cause unnatural wearing down of your other teeth, and can even lead to more tooth loss. Over time, missing teeth can even lead to a weakened jawbone. For all these reasons and more, tooth replacement options are an extremely important service provided by your dentist. And one of the most popular of those options is the dental bridge.

A dental bridge is an appliance that is intended to replace one or more missing teeth. Although there are different bridges available (see below for more information about the types of bridges), generally speaking, a bridge consists of one or more artificial teeth (i.e., crowns) mounted in a metal frame that fits inside the patient’s mouth in the gap left behind by the missing teeth and supported by adjacent natural teeth (also referred to as “abutment” teeth). Unlike partial dentures, bridges are typically “fixed” or not removable by the patient.

There are three types of bridges available:

In addition to the obvious difference between a crown and a bridge – namely that one consists of a single tooth restoration while the other is a tooth replacement appliance – the other way in which they differ is that they serve very different purposes: A crown is intended to restore a damaged tooth, while a bridge is intended to replace one or more missing teeth. Crowns are often used in dental bridges, and both crowns and bridges are extremely strong and durable, typically lasting the patient for many years. To learn more about crowns and bridges, and to find out which would be the best choice to resolve your dental issues, contact your dentist and schedule an appointment today.

Our New Patients
get Free Teeth
Whitening for LIFE!